One of the things I've been watching again lately is Doctor Who. The repeats have just gotten to the end of season 4 and while I've been watching it on the telly off iPlayer through my cable box, the last episode just ... isn't ... listing ...

My newer laptop can't help this time, as the TV output on it is Round Peg Square Hole and doesn't fit the telly. So ... 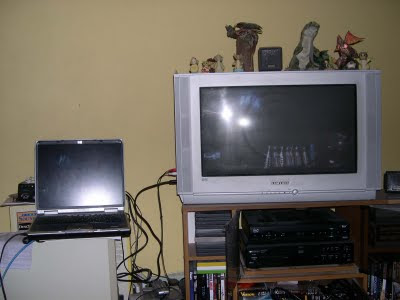 Picture's a bit washed out from camera flash but there we have it, laptop beside telly feeding me Dr Who amidst a swath of cables.

Not a bad picture too, although I think I'm getting a taster of the improvements HD telly makes with the two screens side by side. I think the laptop picture is doing HD while the telly is limited to normal definition. Yep, there's a difference. Gotta be looking for it but there's a difference.

Right - time to get back to Dr Who before I pack away the old laptop again for another 6 months.

PS There's an impending crash, bang, wallop from when I trip over the network cable.

Posted by Sleepypete at 11:25 pm No comments:

Pass me the jump leads !

Cos I think I need them at the moment :-)

That post last week, where I said I'd take those cold symptoms, lock them in a box and stuff the box somewhere to give it a good ignoring. Lol - guess who got put in the box instead of the bugs ? :-) Heh heh heh, apart from Wednesday (yes, right after that post got dispatched ...) it wasn't too bad.

It just coincided with a week I was planning to have as rest and recharge ... I don't think it changed much of what I did though, which was listen to lots of music, catch up on recorded stuff and have a crack at the occasional game. Not much Eve, which I reactivated a week or so ago, cos I wasn't particularly feeling like being involved with the rest of the human race.

Until Saturday ... when I went Pizza Hunting. Rejoined Human race, Human race didn't quite know what to make of it. (Human race being a dazzingly cute cherub in the pizza shop taking the form of a blonde possibly half my age - i.e. jailbait) Truth, I wasn't impersonating a particularly impressive member of the human race at the time. Pizza was worth it :-)

Recorded stuff - lots of Stargates. I still think Babylon 5, closely followed by Farscape is the best sci-fi on telly, Stargate SG-1 definitely gave them a good run for their money. I'm up to the end of season 3 now, great early years in this series (fantastic entertainment value), it's a shame it went on probably a couple of years too long. Not sure what to make of Stargate - Universe, needs more time.

House, shaken up again, still good stuff. Regenesis, wanna watch this again from season 1 - it's intelligent drama with strong and highly amusing characters. Warehouse 13, fluffy stuff, still watching out of curiosity. (What's the line about his men would follow him anywhere, if only out of curiosity ?) Flashforward definitely has my attention now.

Impressed with : Roberta Flack, Cardigans First Band On The Moon (album with Lovefool), Dr Who season 4 soundtrack
Not so impressed with : Paramore's latest - sounds like the other two but not as good. Bit disappointed.

So - couple of hectic days back at work, got stuff done plus I had a few major victories in making people laugh. "Im in ur filez editin ur commentz". I like to make other people laugh cos it makes me feel better too. No-one's noticed the haircut though. Or maybe they have and they didn't want to say anything ;-)

Still not back to full form after the bugs and I have an early start tomorrow, so it's time to wrap this one up before I start rambling and babbling. Oops - Too late !
Posted by Sleepypete at 9:00 pm 2 comments:

Lol - as so often happens with me, a week away from work is accompanied by bugs ...

Seems I share that this time around, most of my friends around Bristol seem to be suffering from bugs in one shape or form. For me, it's an extremely runny nose with the accompanying sinus trouble. Not much sleep last night but I don't seem to be feeling the effects of that.

But hey - my bugs aren't too bad at the moment and I know other people have it worse. So it's time to do what I usually do with stuff that slows me down, stuff it in a box and lock it away. What else have I been up to ?

Trip up to see my mum & dad, always worth it. Drove 3 different cars in 3 days, the Focus I own and the Mazda they've had for a while. The third was something a little more special :-) My dad's retirement gift to himself is a Mazda MX-5 and if various of my muscles weren't unhappy with me at the moment, I think there'd have been many more thoughts of WANT ONE :-) It's still another 18 months though before I can change car and I'm hoping something good will come from hybrid car technology.

Gaming again on Monday night, first time for a while. I have another Bashara this time around, think Girl With Big Sword. Our party this time around is all about getting in fast, doing huge amounts of damage and clearing the bad guys before they know what hit them. First encounter this time around, blue dragon matching the blue dragon on my t-shirt of choice on Monday. Next week's t-shirt is either going to be my Alien t-shirt or my Send In The Wookie. We shall see :-)

Right - time to get back to catching up on all the telly I have recorded, there's lots of it :-) Hopefully I'll improve tomorrow, enough to take a trip into the centre of Bristol for a music raid :-)

PS I see another music post coming on soon ...
Posted by Sleepypete at 1:19 pm 2 comments:

I think I scared a few people on Saturday.

I'm involved on and off in 2 of the big online games, Eve Online and World of Warcraft. I've hopefully kicked the World of Warcraft addiction now but the Eve people keep drawing me back in to that game. An online game is made far better if there's good people around and I've been lucky to have been involved in a few of the better groups. Warcraft had the Mercs while that lasted and then later the Violence Reborn people :-). Eve has the Volition Cult people, with the Volition Cult being an alliance in that game that's now lasted 3 years.

The karting was part of our 3rd anniversary meet up :-). We went to a place called M4 Karting, not too far away from where most of the UK part of the alliance is based and indeed only 30 minutes from where it was born. Good track this one, housed in what used to be a hardened aircraft shelter attached to the nearby airfield. The circuit itself was twisty and nicely technical, with a good consistent surface. Some karting tracks suffer from bumps, grooves or even things like wooden floors instead of smoothed tarmac ... I had great fun powersliding round all the fast corners :-)

Oh - this track also had a She Who Must Be Obeyed running the show. Most definitely In Charge, although they had one or two techie hitches with the timing gear. Will certainly go back there, we had a lot of fun at that track with plenty of stuff going on to keep us bantering on the Volt forums afterwards.

Will have to check out Radio Control cars some more too as this place had a shop selling them, which is getting rarer and rarer nowadays. It helps to know what you're looking at when thinking about buying things though, especially if it's a specialist market ...

I don't think I scared people on the karting track though, I'm a bit too heavy still for that. The scary was on the trip to the pub afterwards :-). The satnav I use tends to be a little "aggressive" on the roads it chooses ... Let's just say that you wouldn't want to take a lorry down the same routes. And I got to the pub about 10 minutes before anyone else :-)

I'm looking forward to next week at the moment, it'll let me get recharged on "Calm" after a week that I'm still detoxing from :-)

Wednesday - 13 hour day trippin' down to Portsmouth for some performance testing. Cue the "testing diet" ... aka strong black coffee + biscuits. Keeps you awake but the caffeine does weird things to you.
Thursday - coming back from Portsmouth and hoping that Orange Light Of Impending Engine Doom goes off ... Yep, had another scare from that one starting on Wednesday. Also watched the film Creation after having pizza with the Crazies :-)
Friday - easy night (needed it!)
Saturday - karting with the Volt boys, followed by trying to munch a pub dinner with hands that were insisting on cramping up ...
(ow)

I've been needing a bit of chill out time anyway and I reckon that as that gets closer, you slow down and feel the tiredness even more. So come Monday, I'll be looking to think as little as possible of work although I'll be missing having the chance to natter with and tease a few of the people I work with.

There's a few people who make where I work far more entertaining than it could be, from the ever wonderful Snow Queen, The Boss with her empathy, Wild Thing teasing me about the Little Canteen Girl, Ms Sunshine's continual readiness to burst out with a room illuminating smile and cheerful laughter and the diminutive Miss M who's been taking advantage of my techie talents lately (while being bemused by my efforts to have my way with a devious plan for the file system).

We're also blessed with fun people in our finance section (an area I deal with a fair bit lately). We keep an eye on what the project is spending, which means painstaking attention to detail on admin. But that's made into fun by our Finance Girls :-) They've been recruiting too, with someone recently arriving who's shadow betrays her invisible Angel's wings. I also get on very healthily with my actual boss, although healthy in that respect also includes us setting each other off in the mornings when one of us gives in to Munchie Cravings. There's also El Diablo, a fellow gamer and sci fi nut who is the one who pointed me towards the Jack Campbell books. And we have more too that I'd mention except imagination failure means I don't have Blog-Safe codenames for them.

Great bunch of people, I'll miss them next week while I'm off work :-) But after putting this refresher week off for a few, I'm really feeling the need for it now.

Right - I've nattered for far too long ... so long my feet have started to freeze. Time to sign off and shut those curtains for the first time this year ...
Posted by Sleepypete at 8:13 pm 5 comments:

Sleepypete
No pizza is safe ! And neither are the Mini Eggs.

This work is licenced under a Creative Commons Licence.